Eventually, it will seem funny. Here’s how to make “eventually” happen sooner. 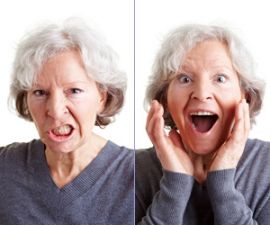 I once saw a billboard alongside I-5 that read, “Anger is one letter away from danger.” I believe when we overuse anger, we do endanger ourselves and others. A mind (and body) in a constant state of fight or flight wears out more quickly than a mind (and body) that find ways to lighten up and let go. I’m not trying to say that anger isn’t a valid and valuable emotion—it’s just that too many of us go there far too often and for tiny little stressors that don’t deserve our anger energy.

The good news is that we humans naturally turn our anger (and frustration, annoyance, irritation and other lesser forms of being disturbed by circumstances around us) into laughter. Eventually. Some of the funniest stories we tell on ourselves were things that got our goat (or llama or alpaca, whichever you choose) when they happened, but by virtue of the passage of time, we’re able to gain a better perspective and see the humorous side of things. The problem is that eventually is too long to wait. If you’ve recently been to the DMV or tried calling your cable company, you know what I mean. You don’t want to burn out by the time your natural sense of humor replaces your angry feelings.

The question is, how can you speed up the process? Here are my five best tips:

1. Distract yourself! In one study, two fake traffic jams were created (because there aren’t enough real ones out there). In one, drivers were left to fuss and fume on their own. In the other, the researchers created three distractions—warm & fuzzy (a puppy being walked alongside the vehicles), sexy (a good looking man and woman walking by), and funny (someone doing stupid human tricks nearby). Researchers studied both groups and counted how often they showed outward displays of anger (honking, yelling, stomping around outside their cars, shooting the finger, etc). In the group with the distractions, angry responses were significantly reduced and the type of distraction that worked best was humor. That’s right, humor beat puppies!

Have plenty of silly, stupid, funny distractions in the places where you know your anger response gets turned on the most—your car, your office, at home next to the phone for those times you need to call to complain about things that don’t work.

2. Count on basic math. If you decide to spend 30 more minutes a day laughing (by inviting funny friends to lunch, watching a funny TV show, reading a funny book, etc.), basic math dictates that there are now 30 fewer minutes available for you to be angry (unless, of course, you set your alarm for 2 a.m. so you can have more time to fume. If that’s the case, you may need more help than this newsletter can provide).

3. Google it. The next time you feel your head is about to blow up with rage over some issue you know intellectually is not worthy of your anger energy, look online for funny stories and videos that relate to this same issue. I recently broke my nose by walking into a plate glass door (yes, I’m that cliché!) and when the bleeding finally subsided, I found four really funny videos of other people doing the same thing. The value of this exercise is that is allows you to find the humor in your specific situation faster by removing you from the equation. We always find it easier to laugh at others mistakes and problems than our own.

4. Be angry funny. No, this isn’t like Tyra Banks’ concept of Ugly Pretty on America’s Next Top Model. Rather than expressing anger in your usual way, find more laughable options. Instead of shooting the finger, make up a silly hand or arm gesture (Chicken Dance, anyone?) Curse in pirate or a foreign language. By circumventing your usual responses, your brain will start to acknowledge the silliness of your negative emotions quicker.

5. Write three jokes about it. As a comedy writer, if I didn’t get frustrated, annoyed, confused, and embarrassed all the time, I wouldn’t have anything to write about. When people are trying to be funny on purpose, they almost always rely on negative emotions as the source of their comedy (think of your favorite comedy TV show or movie and ask yourself what it’s really about). The next time you’re unnecessarily upset about something, take five minutes to write three jokes. They don’t even have to be good—it’s the process that’s important. 1) I hit that plate glass door so hard, local seismologists reported an earthquake. 2) I didn’t mind the embarrassment and the bleeding, but the pointing and laughing bothered me. Of course, it was me who was pointing and laughing, so I could have stopped it if I wanted to. 3) For a week afterward, I had two black eyes. Everyone thought I had “work done.” Now they tell me how much younger I look.

Try these simple tips and see if you don’t let go of some of the unnecessary anger in your daily life.