Home  »  Articles  »  Coffee and tea may stave off Alzheimer's

Coffee and tea may stave off Alzheimer's 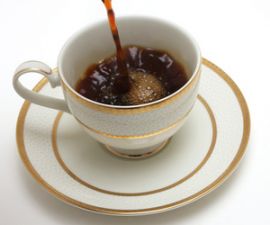 A recent study in Finland concluded that consumption of caffeine-containing substances such as coffee and tea may help protect against the onset of Alzheimer's later in life. This conclusion was made in a Finnish Cardiovascular Risk Factors, Aging and Dementia (CAIDE) Study published in the January 2009 issue of the Journal of Alzheimer's Disease (Volume 16:1). The study was conducted at the University of Kuopio, Finland in collaboration with Karolinska Institutet, Stockholm, Sweden, and the National Public Health Institute, Helsinki, Finland. It included participants from the survivors of population-based cohorts previously surveyed within the North Karelia Project and the FINMONICA study in 1972, 1977, 1982 or 1987 (midlife visit). After an average follow-up of 21 years, 1409 individuals (71%) aged 65 to 79 completed the re-examination in 1998. A total of 61 cases were identified as demented (48 with AD).

"We aimed to study the association between coffee and tea consumption at midlife and dementia/AD risk in late-life, because the long-term impact of caffeine on the central nervous system was still unknown, and as the pathologic processes leading to Alzheimer's disease may start decades before the clinical manifestation of the disease," says lead researcher, associate professor Miia Kivipelto, from the University of Kuopio, Finland and Karolinska Institutet, Stockholm, Sweden.

At the midlife examination, the consumption of coffee and tea was assessed with a previously validated semi-quantitative food-frequency questionnaire. Coffee drinking was categorized into three groups: 0-2 cups (low), 3-5 cups (moderate) and >5 cups (high) per day. Further, the question concerning tea consumption was dichotomized into those not drinking tea (0 cup/day) vs. those drinking tea (≥1 cup/day).

The study found that coffee drinkers at midlife had lower risk for dementia and AD later in life compared to those drinking no or only little coffee. The lowest risk (65% decreased) was found among moderate coffee drinkers (drinking 3-5 cups of coffee/day). Adjustments for various confounders did not change the results. Tea drinking was relatively uncommon and was not associated with dementia/AD.

Kivipelto also notes that, "Given the large amount of coffee consumption globally, the results might have important implications for the prevention of or delaying the onset of dementia/AD. The finding needs to be confirmed by other studies, but it opens the possibility that dietary interventions could modify the risk of dementia/AD. Also, identification of mechanisms of how coffee exerts its protection against dementia/AD might help in the development of new therapies for these diseases."