Three suggestions for transitioning into retirement. 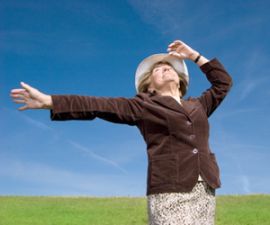 There’s so much to think about when planning for retirement—what you want to do, where you want to live, how to stay healthy, and how to cope with the changes that are bound to come your way. It’s easy to go into overwhelm. You wouldn’t think of building a beautiful, new house on a pile of rubble, so why hang on to the debris that will keep you from living the life you’re meant to be living?

Sometimes, in your eagerness to move on to the next thing, you might not realize there’s a pile of rubble in the way. Before you begin to create your future, take some time to:

1. Make peace with the past. You may think the past is past, but most likely it’s holding you back from what you really want. Releasing the power the past has over you is crucial to achieving the kind of freedom you yearn for in this next stage of life. Forgiveness is the key. Before you run screaming from the room, hear me out.

When I left my career as a television and special event producer behind, I was carrying a lot of anger at how I had been treated in my last position. I was making great money, had high visibility, and was really good at what I was doing. I had a wonderful relationship with my boss, until that final year when I became the scapegoat du jour. Every year I worked there, someone was the scapegoat. I never dreamed it could be me.

The abuse that came my way was truly crazy-making—no rhyme or reason. It just came out of nowhere over and over and over again, until I realized that I was a grown woman with a choice about how I would be treated, and where I would share my gifts. I moved on; the anger came with me.

After bumping my head against the proverbial brick wall several times, I decided to deal with the past. It wasn’t easy, but over time I was able to get a 30,000 foot view of the situation. While my boss’s behavior was inexcusable, I could see that this powerful, brilliant man was riddled with insecurities. I was also able to see the incredible opportunity he had given me—to do work that I love with people I love working with. Once I let go of my anger, I could move into the life I really wanted.

2. Perfect the present. In the coaching world, there’s a saying, “the present is perfect, even when it’s not.” Like forgiveness, this isn’t an easy concept to grasp, but once you do, life gets so much easier.

My client, Doreen, was working in sales for a major financial institution, and was consistently producing in the bottom half of her division. She blamed the company, and was so vocal in her discontent, her boss would turn and run the other way when she saw Doreen coming.

With coaching, she realized if she left for another job, she’d still be the same person. Staying put for awhile gave her the opportunity to work on shifting her perspective, explore what was next while still getting a hefty paycheck, and try on some new ways of being. She made a game of changing her attitude, and within six months was #3 in sales. Her boss even began to come to her for advice on ways the company could improve.

Doreen recently left the company to start an online business. She’s excited about the future, and knows her new attitude, and ability to see the opportunity in every situation will be invaluable in growing her business.

3. Re-orient your life around your gifts. I’ll bet like many of us, you’ve spent a lot of years doing work that you’re good at, but it doesn’t fully use your gifts—those skills, abilities, passions that light you up from the inside out.

JoJo had a successful career in publishing, wanted to move on, but wanted to do it differently this time. She wanted to figure out what she really wanted to be doing and pursue that, rather than pursuing a career just for the sake of making money. With coaching, she began to explore her desire to paint. She set up a small easel, canvas and paints in a corner of her office and committed to painting just 15 minutes every day.

JoJo was surprised to discover that while she loved painting, she also loved making money to be able to take care of herself, as well as entertaining friends and family in her home. Before long, JoJo bought a lovely B&B in need of some TLC, painted every room a rich warm color, filled it with art (hers and others), and opened it to guests year round. That was five years ago, and JoJo loves her new life.

By taking stock of where you’ve been, where you are right now, and who you are at your core, you’ll ready yourself for the retirement you really want.