Can Marriage Make You Fat?

The answer is, “yes.” And so can divorce. 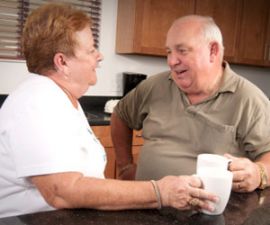 So is marriage another risk factor for making you fat?

The data from this year’s American Sociological Association Meeting are troubling, though not surprising. Studying over 10,000 men and women as part of National Longitudinal Survey of Youth ’79, weight gain was common among both men and women in the 2 years after marriage.

Researchers from Ohio State tried to control for many different variables, ranging from age to socio-economic status to children. Their end results were to look at changes in BMI—body mass index, an imperfect number of weight related to height that however correlates with many health outcomes. Modeling allows you to go just so far, but some of the numbers were unexpected:

• Proportion of women gaining 1-3 BMI points in the first two years of marriage: 33%.

• Risk of those married gaining a lot of weight (more than 3 BMI points) versus those not marrying: 48%.

• Proportion of men gaining weight after divorce compared to those staying married: 63%.

Most of the weight gain occurred in those over 30 years of age—twenty-somethings did not see much weight gain with marriage.

Most reasons remain speculative—there are lots of variables to consider. One of the study co-authors cited one cause as marriage leading to women having more to do around the house and less time to exercise. However, there are several other potential factors:

• Economic requirements—different times and amount of time spent on the job.

However, the study went out only two years—not always enough time to add new biological children to the household. And taking care of children can produce tremendous amounts of physical activity—especially when they’re small.

Another study at the Sociology meetings was more in the tradition of old time research—in depth interviews with couples, straight and gay. Corinne Reczek of the University of Cincinnati questioned long-term couples on their health habits.

In the straight couples, the changes towards “unhealthiness” were squarely placed on the guy.

If the males preferred Dr. Pepper in the morning, the females not infrequently followed suit. Junk food preferences among males led to more junk food meals by the females—not the other way around.

Gay couples, on the other end, claimed their health behaviors were far more egalitarian—if one wanted to go out and get that gallon of ice cream, both would then gorge—often simultaneously.

Lots of things affect people’s weight—culture, sleep, timing of eating, age, among many others. But when two individuals become a couple a long series of negotiations ensues, as food culture and behavior become combined.

As in most negotiations, the end result is not always neat and is often uneasy. Anyone who cooks for a family knows that food desires not only vary, but sometimes appear antithetical.

When there are differences and conflict between family members on what to eat, matters of convenience may become more prominent—why cook an elaborate dinner when your kid only wants pizza?

The siren of fast food then sounds much louder. Fast food is far more than fast and convenient—thanks to government subsidies, it’s cheap. A full 7% of American meals originate at McDonald’s.

And when couples differ in their food desires and culture, the influence of the larger society becomes greater; I may want to be a vegetarian, but my husband could care less—if he wants to eat junk, let him—I’m not going to cook him a steak.

Marriage has many perils and pleasures, but one peril may be weight gain as individuals try to combine food and health habits.

Romance can be wonderful, but couples must also consider their varied lifestyles—how they sleep, eat, and move—as they plan life together.