Can Even Minor Stress Kill You? 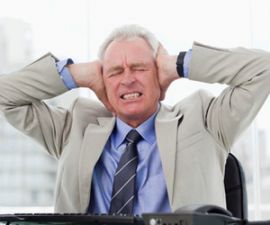 How Was the Study Done?

The National Health Survey looked at 68,000 British adults from 1994 and 2004 and followed them up. Many questions were asked, including the General Health Questionnaire, which gets information on worry, stress, and overall behaviors like smoking and drinking. Death certificates were checked for everyone who answered questions.

About a quarter of the population was found to have “mild” psychological distress. Their death rates over the years went up 16%.

For those more seriously affected—and more often treated—death rates went up 67%—after correcting for factors like smoking, drinking, physical activity and weight.

What Does That Mean?

The statistics attempted to control the fact that stressed out people drink too much, smoke, and behave in ways that make them more likely to die. It’s been known a very long time that depressed people don’t take care of themselves very well.

And the Mortality Rates Still Went Up?

Yes. The higher the stress levels, generally the higher the mortality—after controlling for “risky” behaviors.

Are There Other Explanations for These Results?

It could be that the opposite is true—that people who will eventually turn sick and die earlier develop stress from the underlying conditions that kill them. For example, people with pancreatic cancer often describe horrendous depressions before they’re diagnosed. The study authors tried to correct for such possibilities as much as they could.

Is This Data New?

Only for its comprehensiveness and long term results. University of Iowa professor George Winokur, who did much of the research on the “Iowa 500”, people with psychiatric illness who were followed for decades, produced similar results in the 1970s. However, minor degrees of distress have not always been acknowledged as an eventual cause of death in healthy, young people.

How Does Stress Kill?

Probably in dozens of different ways. Research on stress hormones and inflammation argue both increase with relatively small increases in people’s perceived distress. They clearly alter information flow throughout the body. Yet this does not explain causality very clearly, as there are so many unknown variables.

What Can People Do About It?

Recognize that stress—particularly mental stress—is detrimental to overall health. Almost anything they can do to beat it may prove helpful in the long run.

What Concrete Actions Can Be Taken?

Recognize there are multiple levels for tackling health problems—ranging from the international to the individual. On the national level, unemployment is a major stressor and cause of bad health outcomes and higher health costs. It’s one important factor among many, but you don’t hear it as part of the national debate.

Other studies show that in poverty stricken communities more greenspace—parks and places to move—radically cuts mortality.

Give people a place to move, and safe streets, and they are far less stressed.

What Can Individuals Do?

The usual nostrums from the medical community will be to “increase treatment.” Due to the structure of American medical care, that would likely increase the use of drugs. Big Pharma will be happy to point out the many medications that can be used on anxiety, depression and “worry.”

Psychotherapy is certainly a sensible option. Getting people to pay for it—especially in a depressed economy and with an unwieldy and tattered health care system—is another story.

However, the sensible things that help people regenerate themselves will work on both low and high levels of stress. They include:

Will This Problem Be Readily Solved?

Not on a societal level. Politicians don’t seem to believe public health exists as an issue—with the possible exception of biosecurity. That there are many cheap ways to make the population healthier eludes them. The public’s sad misperception that medical care = health is also part of the problem. As this stage, lifespan in the U.S. is most powerfully affected by the traditional factors—nutrition, sanitation, education, vaccination—and lifestyle. Instead, recognizing that even small degrees of psychological stress is deleterious may instead produce a flurry of ads for “stress reducing drinks” and “immune formula” whatever—with clinical effectiveness studies blissfully unavailable.

Why Did You Write This Article?

Multiple friends wrote me about the British study, asking if it was true that even low level perceived stress increases their mortality. I explained that it was an old finding—but one that really surprised people.

What’s more surprising is what people can do on their own to reduce stress—if they knew the powerful results.