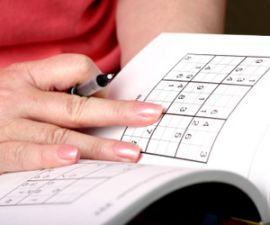 Brain fitness is a hot new topic—as we age, is it possible to maintain the same level of cognitive ability?

Let's take a look at our three-pound dynamo—our brain. Comprising about 2 percent of our weight but consuming close to 20 percent of our energy needs, this vital organ needs to be kept in the best shape possible. It had been, for about a century, a basic tenet in biology that brain cells don't regenerate—that once the brain matures, we have all the neurons we're ever going to have, and we can only lose them. Research done in the last decade, however, has upended this belief, and we now know that new cell growth has been observed in the most advanced parts of the brain involving learning and memory.

Keeping your brain in fighting form
Exercise: At the 2007 annual meeting of the American Psychological Association, researchers reported that aerobic activity had both short and long-term effects, including improved mental functioning and a reduced risk of dementia and Alzheimer's.

It's thought that physical activity actually affects the brain at the cellular level, by providing more blood flow to those areas involved in memory, and stimulating the growth of neurons. So, aerobic exercise can keep both brain and body buff!

Diet: You are what you eat is true for your brain.
Eat plenty of Omega-3 fats, which make up a large portion of our "gray matter." Omega-3 fats are found in fatty fish such as salmon, sardines, trout, tuna, herring, and mackerel, in nuts (walnuts are great—but watch the calories), in oils (such as canola and olive oil), and eggs from free-range chickens.

For produce, think dark: blueberries, blackberries, cranberries, strawberries, spinach, raspberries, Brussels sprouts, broccoli, red grapes, and cherries are all loaded with antioxidants. Lean protein (for those neurotransmitters) and sufficient water (our brains, like the rest of our body, is largely comprised of water) round out some vital nutrients for the brain.

Cognitive Activity: Mental gymnastics may play a role in keeping our brains facile
One type of mental exercise is called "neurobics." A cute play on words, coined by Dr. Lawrence Katz and Manning Rubin by combining the word for brain cells, "neuron," with "aerobic" exercise, neurobics involves using your senses in ways you usually don't, doing something novel, and/or changing a routine.

These activities stimulate your neurons and rev up neglected nerve pathways.

As Yogi Berra said, "You can get old pretty young if you don't take care of yourself."