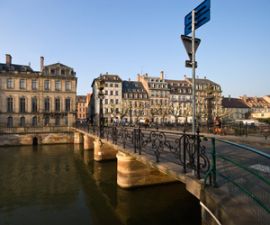 Located in the heart of Europe, the ABC region of France is easily accessible from all major US international airports. Once in Europe you'll find trains and car rentals means of transportation that will not only get you here, but allow you to see beautiful cities and countryside as well. Alsace

The region of Alsace is set to receive a major tourism boost next year when the €5 billion TGV EST European high speed train route is launched. The new service, which opens in June 2007, will cut the travel time from Paris to Strasbourg by nearly half. The new link will reduce the current four hour journey to two hours and 20 minutes, 24 times a day. The new link will also benefit the region's other main vacation centers, Colmar and Mulhouse, with journey times also reduced by almost half. The trains themselves will be state of the art and will travel faster (320 km/hr) than any other TGV in Europe. Journeys will be made in luxury and comfort with interiors designed by Christian Lacroix, increased leg room throughout, family areas (with built-in board games), business areas (withspaces for lap-tops and wireless internet) and a variety of diningoptions.

The Alsace region of France has been at the heart of history since the beginning of civilization; and today the influences, dating back as far as Julius Caesar, can still be seen. The past is everywhere—in the architecture of majestic castles and cathedrals, as well as humble cottages and inns. In the rich and robust recipes that have been handed down for generations and served daily on weathered farm tables and in three star restaurants. In the centuries old forests and equally old wine cellars. In fact, you'll discover entire villages built in the unique "half- timbered" architectural style associated with the Black Forest. From the museums that carefully preserve the artifacts and stories of romance, rebellion and revitalization, to the fairs and festivals that preserve the rituals and customs of this noble heritage, the past is always present.

Located in the center and at the crossroads of Europe, Alsace has played a major role in France's history since the beginning of written civilization. It is home to more ruins of medieval castles than almost anywhere else in France. These remnants have become as much a part of the region's landscape as the trees and soil, reminders of a mysterious past that continues to haunt the imagination and stir curiosity. Haut-Barr, Fleckstein, Hohlandsbourg, and Haut-Koenigsbourg are among several of these vast fortresses that have been expertly preserved and restored to their original magnificence. The Haut-Koenigsbourg castle, dominating the plain at 757 meters above sea level is a fortress built in the 12th century, then rebuilt and modernised in the late 15th century. Abandoned in 1633, this highly prestigious castle that once belonged to the Hapsburgs at the time of the Germanic Holy Roman Empire became the property of the Emperor Wilhelm II of Germany in 1899. This Emperor dreamed of re-establishing the Western Empire and he indulged his passion for the Middle Ages by ordering the restoration of the castle. A pivotal element in the restoration, this castle built on a sandstone spur that was previously relatively easy to defend and providing an excellent lookout station, now enables visitors to enjoy a fabulous panoramic view of the plains of Alsace, the Black Forest and sometimes even the Alps.

Though their purpose was to protect the surrounding area from attackers rather than to impress the eye, their architecture is both impressive and beautiful in its own right. They are particularly interesting for their color—a pale, luminous pink, owing to the mountain sandstone into which they were built. More than 500 castles were built in Alsace between the start of the 12th Century and the middle of the 14th Century. Often built on the top of the rocky pinnacles so typical of the Vosges Mountains, these outcrops were natural defensive positions. Some of these castles were actually built into the sides of the mountains, incorporating natural caves into the architecture so that the castle and mountain became one. Both home and fortress, they were the target of many of feudal war, and sometimes the haunt of robber-barons.

No trip to this region would be complete without a walking tour of historic Strasbourg, home of the majestic "Cathedral Notre Dame" and "La Petit France," the oldest and most beautifully preserved area of the city. And don't miss the beautiful town of "Colmar," with its medieval architecture, sculptured gables, and fairytale houses. From castles to cathedrals, wineries to walking tours, there's so much history and architecture to experience that you'll want to allow plenty of time to savor it all.

Despite being the smallest region of France, Alsace has become a major hub of food and wine, with 34 Michelin-starred restaurants to its name—more than anywhere else in France outside Paris. But even the savviest holiday travelers don't necessarily head to a gourmet restaurant when they want to savor the authentic flavors of Alsace. Winstubs, or bistros, are unique to the region and favored equally by visitors and locals, who gather for hearty specialties including choucroute (Alsatian sauerkraut garnished with myriad variations of sausage, potatoes, spices, and more), baekeoffe (meat stew), and tarte flambée (savory bacon and onion tart). Altogether, there are more than one hundred winstubs found throughout Alsace, each with its own special way of preparing signature dishes. Another treat for travelers—in virtually all the towns, annual wine festivals light up the seasons. These events can last several days, so be sure to check into one of the many small, family run auberges for unparalleled hospitality and delicious meals. But no matter where you stay or dine, a trip to Alsace is not complete without a pilgrimage to the Cave Historique des Hospices de Strasbourg, an historic cellar, dating back six centuries. Each year, the wines, representing nearly 40% of all the Alsatian vineyards, are sampled and those deemed most promising are then stored in barrels, where they mature to their peak. After months of the best care and a final round of tasting, the wines are bottled onsite for unmatched quality. Today, with its expert oenologists and ideal storage conditions, the Cave Historique is perfect for the best Alsatian wines, and its vaulted ceilings and iron gates make it a treat for the eyes as well.