Are You Addicted to Fast Food? - Retirement Net by Liz Neporent

Are You Addicted to Fast Food?

Can you really be addicted to burgers and fries? The science says yes. 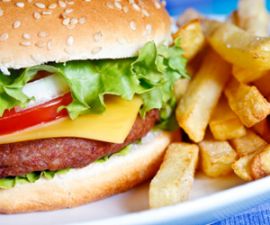 A few years ago, a 56-year-old diabetic and double heart attack victim filed a class-action lawsuit against McDonald's, Burger King, Wendy's, and KFC, claiming that his illnesses were partly their fault. He had eaten in their establishments for years, he said, without ever being told that their food could have a negative impact on his health.

On the face of it, the plaintiff and others like him seem to be using the legal system to compensate for their own lack of control and common sense. Surely everyone should realize that a Big Mac is not a health food just as they should grasp that parking yourself in front of the TV for 28 hours a week—as the average American does—is not a healthful activity. What about personal responsibility? Aren't we all in charge of what we put in our mouths?

Perhaps. But maybe not entirely. There is emerging research to suggest the brain can become hardwired to crave a hit of extra crispy chicken just as it might any other addictive substance. Consider a study done at Albert Einstein College of Medicine in New York City, located a short train ride away from where the plaintiff ate his way to obesity.

Researchers found that feeding rats a diet similar in composition to the typical fast food meal—that is, high in calories, saturated fat, and sugar—lowered their ability to respond to leptin, a hormone that signals the hypothalamus gland to regulate eating behavior. The fatter the rats got, the more leptin they produced, and the more their brains received the mixed up signal they were in danger of starvation; thus, the overeating and excessive weight gain. The researchers discovered that improper leptin response kicked in after the rats ate only a few high-fat meals, and that the fatter the rats became, the more resistant they were to leptin's effects, and the harder it was to reverse the trend.

Of course, a rat is not a person anymore than a laboratory is a fast food joint. The biological processes of eating and hunger are complex, governed by more than a single hormone and, at least for us humans, convoluted by a host of psychological and social factors.

Not surprisingly, the lawsuit was deemed to have no legal merit and was dismissed. The legal strategy was modeled after cases brought against the tobacco industry but, whereas the addictive qualities of tobacco are clear, burger-and-fries dependency is still in question. If fast food addiction is proven then, a suit like this will not be so easily dismissed.

Regardless of their legal liability or what the science says, I have no doubt that fast food companies share at least some of the blame for global corpulence. At the very least, they've been pumping their products full of great tasting but calorific ingredients and then aggressively marketing them to consumers, especially children. The industry has helped create our appetite for unhealthy food.

But the fast food companies are just the tip of the iceberg. How do you single out Burger King without also blaming Swanson's for inventing the TV dinner? Or Pillsbury for using palm oil, the lard of vegetable oils, in many of their baked goods? Or Coke? Or Pepsi? Or Doritos? Or Krispy Kreme? Or your mother for admonishing you to clean your plate lest you waste away to skin and bones?

In the end, I believe that each and every person must take responsibility for his or her own excess adipose and commit to safely and sanely shedding it. Not only must we break our fast food and junk food addictions, we also need to go cold turkey when it comes to quick fix weight loss solutions. We know what counteracts the consequences of McGorging: Eating less and moving more. When you commit to doing these two things—no gimmicks or shortcuts—that's when you'll finally have control over your weight, health and life.

Liz Neporent is a health and fitness writer based in New York City. She is author/coauthor of more than 15 best sellers, including Fitness for Dummies and Weight Training for Dummies. Her new book, The Winner's Brain, will be availble April 1, 2010. There are lots of ways to keep up with what Liz is writing about: you can follow her on Twitter @lizzyfit or stop by her Facebook page and say hello! Or, visit her company's website, w360.com, or her popular fitness blog.