Are We Fatter Than We Think? - Retirement Net by Dr. Matthew Edlund, MD, MOH

Are We Fatter Than We Think?

And if we are: what can be done about it? 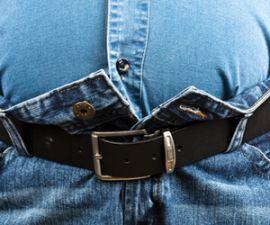 A recent study in PLOS 1, an online journal of medicine, argues that Americans are far more obese than present standards of obesity, defined by body mass index, imply.

In a study of 9000 patients in a New York private practice, at least 39% of those classified as overweight are thought to be truly “obese.” The authors, who include the new New York State health director, argue that new cut-offs of BMI 24 for overweight and 28 for obesity should be made, and that our obesity epidemic is far worse than the disaster we already think it is.

Does This Study Compare Apple and Oranges?

How Was the New Estimate of Obesity Made?

By two measures—a DXA scan, which looks at total fat throughout the body, and leptin, a “hunger” hormone that correlates according to the authors pretty well with DXA scan results.

How is Obesity Defined by DXA Scans?

For men, more than 25% of body weight coming from fat equals “obesity”; the percentage required for women is 30%. Especially as people got older—and lost muscle mass—DXA scans came up with higher proportions of obesity than BMI did.

Is This A New Controversy?

No. People have been arguing that BMI is obsolete for a very long time. They point out that visceral fat—the stuff around organs—is an endocrine gland that produces more of itself, along with higher rates of diabetes, atherosclerosis, and increased mortality. Fat in other places does not appear as dangerous.

Why Does BMI Get Used So Much?

History and communality of use. Because it’s used by governments and insurance companies to define their populations—and what they will and will not pay for, for example, in bariatric surgery. And it’s pretty easy for people to measure their weight and their height and then come up with this number.

It certainly is an indicator, but others that are equally easy to use are probably more useful in telling you whether people will get sick or not.

What Other Tests Are More Predictive?

What Can Be Done?

1. Recognize that fat is not just plain “fat.” There is white fat, brown fat; fat on the hips and fat around abdominal organs (visceral fat). All have different implications for health and prediction of future health.

3. Use health measures in ways that truly support individual and public health. Many folks are deeply focused on weight rather than what’s inside their body; many a model leads a profoundly unhealthy lifestyle. Many human shapes can be healthy, along with different cuisines and exercise types.

But when you want to know what something means, you look at its long term health implications. Waistlines may be more important in this way than weight.

And they’re easy to measure.