A Grand Relationship - Retirement Net by

Children really do derive a lot of benefit from spending time with grandparents. 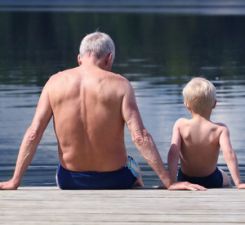 Spending time with a grandparent is linked with better social skills and fewer behavior problems among adolescents, especially those living in single-parent or stepfamily households, according to a new study.

This study, appearing in the February Journal of Family Psychology, published by the American Psychological Association, found that children and adolescents whose parents have separated or divorced see their grandparents as confidants and sources of comfort.

"Grandparents are a positive force for all families but play a significant role in families undergoing difficulties," said lead author Shalhevet Attar-Schwartz, PhD, of The Hebrew University of Jerusalem. "They can reduce the negative influence of parents separating and be a resource for children who are going through these family changes."

The researchers asked 1,515 English and Welsh 11- to 16-year olds from 1,010 schools who lived with two biological parents (66.3 percent), a single parent (18 percent) or within stepfamilies (15.7 percent) how much involvement they had with their closest grandparents to see if this relationship made a difference in the children's emotional and behavioral adjustment.

Students reported that the more they talked to a grandparent about social and school activities, got advice or felt they could ask for money, the less hyperactive and disruptive they were, said Attar-Schwartz. They were also more likely to get along with their peers. "This was found across all three family structures," she said. "But adolescents in single-parent households and stepfamilies benefited the most. The effect of their grandparents' involvement was stronger compared to children from two biological parent families."

Supportive relationships with other family members outside the immediate family may lead to better adjustment for children and adolescents, said the authors, who found this is especially true for children growing up in single-parent and stepfamily homes.

Those living solely with their grandparents were excluded from this study as the authors were only interested in adolescents from other family types.

These findings can be generalized to the U.S. population, the authors said. "It is likely that those adolescents in the United States who have regular contact with their grandparents also reap the same benefits," said Attar-Schwartz.